Over the past weekend, I went on a ski trip to Crystal Mountain! Some really good friends from Austin and Portland also joined us and having them there really made it a blast 😀

The last time I’d skied was around 7 years ago. I used to go with my family fairly often, but ever since I started college I don’t think we’ve been to a ski resort except to maybe just enjoy the view of the mountains and stay at a cozy winter lodge, haha 🙂

I only know how to ski, but on the first day of the trip I actually decided to rent a snowboard because I wanted to give something new a try :0! Before I left for the trip, one of my coworkers told me that I’d be falling a lot, but that was definitely an understatement – I was falling on my knees and butt every few feet down the bunny slope, and for a while I had a really hard time figuring out how to get back up after a fall or even how to move forward after getting back up from a fall :/.

I had a lot of fun learning how to snowboard though, and by the end of the day I wasn’t falling as often which was awesome 😀 But eventually I got tired of getting bruised so I switched over to skiing so that I could start going on the higher slopes 🙂 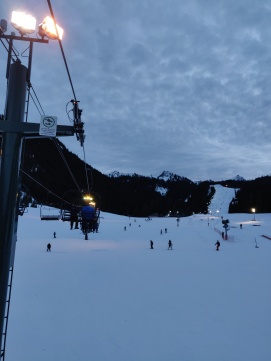 Discovery is Crystal Mountain’s bunny slope, where a lot of beginners were practicing 🙂 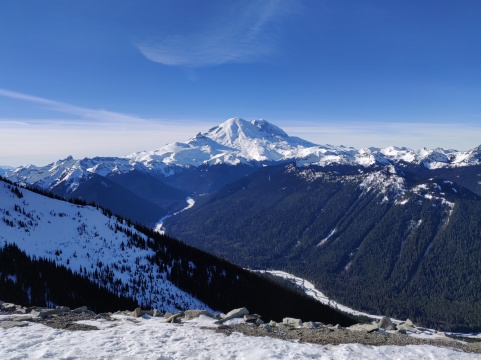 If you take the gondola up to the restaurant at the Summit, there’s a really great view of Mt. Rainier!!

Overall, I had a really nice time on this ski trip – it was really great spending the weekend with people I cared about and enjoyed spending time with, learning something new by trying out snowboarding, and getting better at skiing! I went on my longest run ever with the combination of the Forest Queen route and Quicksilver, and I didn’t fall down once which I was pretty happy about :3

Here are some tips if you’re planning/interested in taking a trip to Crystal Mountain!

The drive over was really nice! Initially we were worried there might be too much snow on the road, which would’ve been a problem for us since none of us really knew how to drive in the snow, but fortunately the weather and roads were both all nice and clear! 🙂

On the way to Crystal Mountain, we passed a city called Enumclaw, where we saw a “Log Show” – basically there was a big log in the middle of what looked like a little baseball field where you could sit and watch the log from some bleachers. It was interesting XD

Crystal Mountain has 3 or 4 different options for lodging, and they’re all at the base of the mountain with convenient locations. There is also another lodge that is fairly close to the resort called Alta Crystal Resort that has a little grocery store which is super nice.

The lodge we stayed at, Quicksilver Lodge, didn’t allow people to cook in their rooms. This was pretty lame because it pretty much forced you to eat at the restaurants at the ski resort. To get around having to eat at the restaurants for all our meals, we packed a bunch of snacks that didn’t require any/much cooking, such as fruit, some bakery items, and a lot of cup noodles :3. One night we did have a really nice dinner experience at The Snorting Elk, one of the main restaurants at the resort – I really recommend their Face Plant drink, it was really yummy! 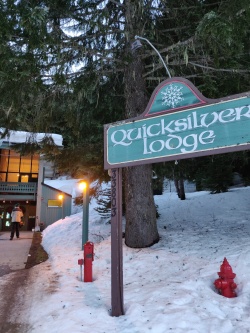 The entrance to Quicksilver Lodge 🙂 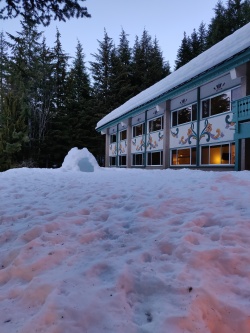 Someone made an igloo in the front yard of the lodge 😀

The lodge itself was pretty cozy, especially the lounge area in the middle of the second floor! There was a very cozy fireplace (which also was almost too extremely effective in warming up the entire lounge), a lot of comfy seating, and some board games that you could play with your friends/family :).

The rooms were pretty spacious but the loft rooms, which were the ones we were staying at, have a really weird layout where the first floor is a mix of a bunch of things.

It was a good space for all of us though, so I can’t really complain too much! 🙂

If you’re planning on renting equipment while you’re at Crystal Mountain, there’s a conveniently located rental shop right at the base of the mountain. They rent out both ski and snowboard equipment, and I think they rent out clothes as well – if you don’t have goggles or gloves though, you’ll have to buy them at the equipment store upstairs since they don’t rent out those :(. 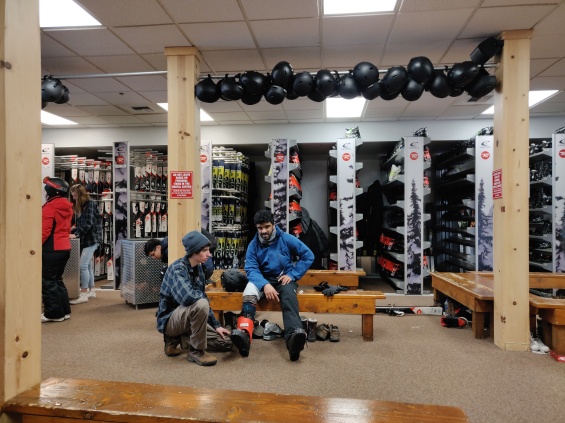 With the rentals, if you’re borrowing them for more than one day, then you have the option of doing a multi-day rental instead of a single-day rental. The multi-day rental is useful because it allows you to hold on to your rented equipment for multiple days instead of returning them at the end of each day and then having to rent them again at the start of the next day. The rental assistant told me that it’s the same price as doing daily rentals so if you’re going to be needing rental equipment for more than one day in a row then there’s really no reason to not get a multi-day rental 🙂

In general, I kind of enjoyed the intimate nature of the experience at Crystal Mountain. It is a lot smaller than the ski resorts I’ve been to before, but the small scale of the resort lended itself to a cozier atmosphere, and it was a lot easier to find and meet up with each other after we’d come down a slope 🙂

I hope these tips help in planning a trip to Crystal Mountain, and as always please feel free to leave a comment if you have any questions! 🙂 Have a safe ski season everybody!