It’s been a while since I posted in my blog, but I’m excited to start writing updates again! 🙂

Vendors were setting up pretty early for the Pride festival

Summer is here in Seattle and with it came some amazing summer weather! One of the ways I’ve been wanting to take advantage of the weather and all the things the Seattle outdoors has to offer is to go on more hikes in the area, so yesterday I went on a hike to Mount Si!

Did you know that Seattle operates a trailhead shuttle that takes you to a bunch of different trailheads :D? Yesterday I took advantage of the service and took a bus from Capitol Hill to the Mount Si trailhead!

All aboard the Trailhead shuttle 😀

There are four different routes that the trailhead shuttle operates for: Mount Si, Cougar Mountain, Mailbox Peak, and Issaquah Alps. They run pretty often (it seemed like there was one every 30 minutes) and you can even transfer from one shuttle stop to another.

The bus driver was telling us that it’s pretty useful for some of the further hikes, such as Mailbox Peak, because instead of going all the way to Issaquah, which is where the Mailbox Peak bus starts its route, you can take the Mount Si shuttle bus from Capitol Hill and then transfer at the Issaquah station to Mailbox Peak 🙂

This is the fare chart (accurate as of 6/30/2019) for a one-way ride on the bus, and you can pay with your standard ORCA card or with cash 🙂

The bus is smaller than the usual Seattle buses and so it doesn’t seat many people (capacity said 26), but it was enough for all of us 🙂

The Mount Si hike itself was pretty difficult, with an elevation of around 4,000 feet with a distance of around 4 miles. There are lots of different routes you can take up around the mountain range, but we pretty much just stayed on the Mount Si trail all the way up to the peak.

The first half of the hike is not too bad, and at the end there was a little makeshift picnic spot with logs for seating in a clear area. A lot of people seemed to hang around here and then head down. If you’re up for the challenge though, you can continue on to a little bridge area.

This is the start of the steep incline up the mountain, and it’s also where most of the elevation was achieved. When I was struggling up this stretch of the hike, I saw some super amazing people running on the trail, and in fact I saw them two more times throughout the hike, just running around the trail! I was so impressed and amazed by their stamina and energy :000

When you reach the end of the steep incline, there’s one final stretch of incline that you need to go up before you can say you’ve really reached the peak of the trail. I believe it’s called the Haystack, and it’s essentially a rocky part of the trail that ends with the peak 🙂 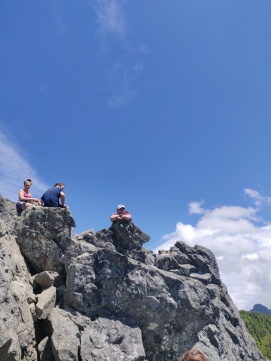 Here’s what the top of the Haystack looks like 😀

It was a really clear day, and you could even see the Seattle and Bellevue skyline from the peak :00

I’m looking forward to going on some more hikes this summer!